WHAT IS PEROVSKITE?
MAKE THE SWITCH TO PEROVSKITE PHOTOVOLTAICS

Now, perovskite materials have emerged as the most promising, efficient, and affordable semiconductor material for photovoltaic applications. Perovskites are a crystalline class of materials that are synthesised in a lab and are often applied as an active layer in the perovskite solar cells in the form of ink. Essentially, a specific formula of precursors is mixed together in a solvent to form ink. This ink is then deposited onto a substrate and sandwiched between different layers including electrodes to be made into a solar panel, as seen here: 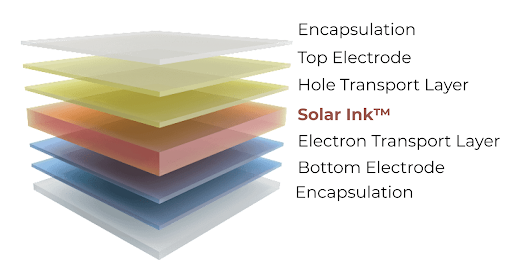 Perovskite can better address some of the issues faced by silicon solar cells:

Perovskite offers new photovoltaic technologies with the potential to be more efficient, with lower waste and carbon footprints, and with more applications than traditional silicon solar technology.

Solaires is one of the industry's few organisations directly involved in the development of the perovskite value chain. We are developing a perovskite-based solar ink and a perovskite solar cell manufacturing process that would manufacture the next generation of solar cells.

Get connected with our sales team today at sales@solaires.net !