INVEST IN PEROVSKITE : A GAME-CHANGER FOR SOLAR ENERGY

Conventional solar cells are reaching their limit. A new material could revolutionize the way we generate electricity: imagine capturing the sun’s energy from anywhere with light, flexible, and transparent solar panels!

An emerging material, perovskite is being used to create the next generation of solar cells. Perovskites are a class of minerals with a specific crystal structure. When used to create solar cells, they display potential for high performance and involves low production costs. This material will allow for solar panels to be in the form of a light, thin-film, which could eventually be twice as efficient as the traditional solar panels we know today, and flexible enough for a wider range of innovative applications, such as on windows, building facades, and electric vehicles.

Today’s silicon solar cells can turn up to 22% of sunlight into power, but they have nearly maxed out at their conversion efficiency with a limit being ~30%. The manufacturing process of silicon solar cells also produces large amounts of greenhouse gases. Comparatively, perovskite solar technology has the potential for large increases in power output and produces lower greenhouse gas emissions, which could lead to perovskite technology ultimately replacing silicon. 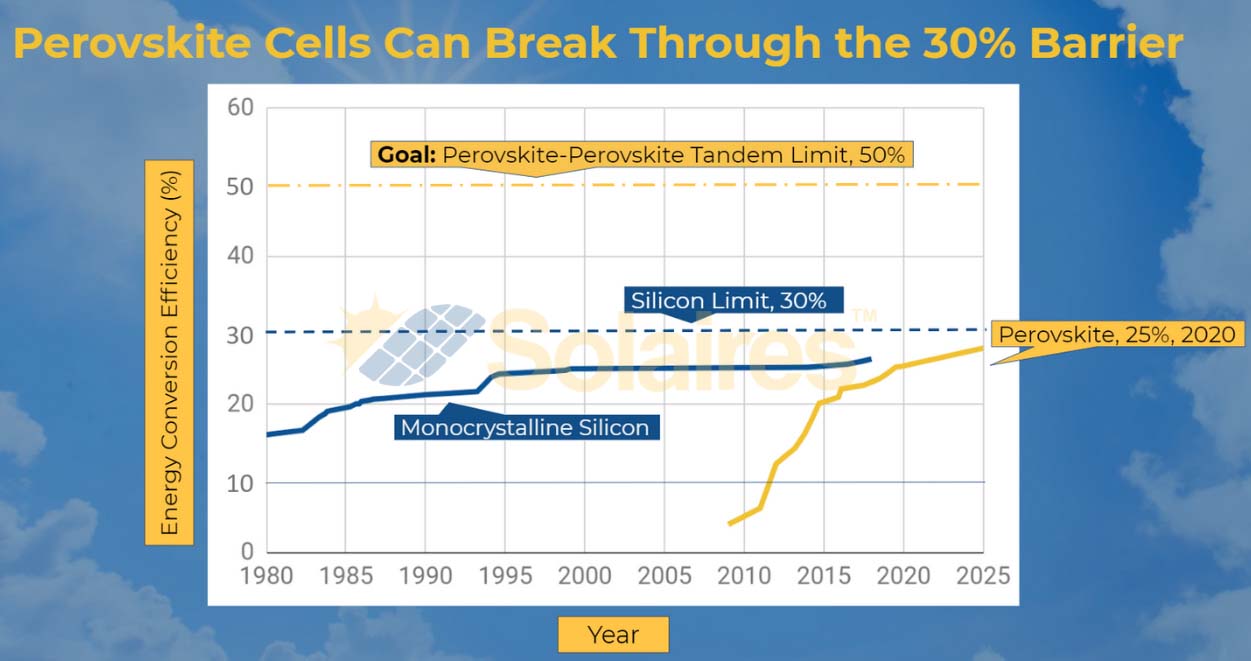 Improved solar cell efficiency will enable installations to produce more power with fewer panels, reduce costs, and the amount of land, labour and equipment required to operate them. Additionally, for a new power generation, the price of solar power needs to be cost-effective to become accessible. To do this, the efficiency of the solar modules needs to be continuously pushed up, which is where perovskites show the greatest potential.

Perovskite solar cells have shown remarkable progress in recent years with rapid increases in conversion efficiency to over 25% today. In the long run, perovskites can drop solar costs . A report from Rethink Energy estimates that it will initially offer only 33% more electricity on a cell for slightly higher manufacturing costs. Then, over the next 10 years, it will cut 50% of traditional solar generation costs, and continue falling in price.

A recent report by Rethink Energy provides an early take on the profound, widespread impact perovskite will have on the energy marketplace:

“These advantages will see perovskites pass 29% of the global market by 2030, and if existing suppliers do not adopt perovskite early, they will fall by the wayside. This will create a land grab in solar manufacturing all over again, with perovskite leaders able to undercut pricing and double the Levelized Cost of Ownership lead that solar already has over other electricity-generating technologies.”

Perovskite solar technology can fundamentally change the capabilities of solar energy. Its beneficial properties have attracted investor interest worldwide and positioned perovskites as a game-changing, front-runner technology that exceeds the performance limitations of conventional solar cells.

A host of countries have committed to significantly cut their carbon emissions in alliance with the United Nations’ 2050 zero emissions target. The manufacturing of perovskite solar cells will be a great addition to the solar energy industry’s push to zero energy emissions. Solaires Entreprises Inc.’s perovskite solar technology will accelerate the adoption of fossil fuels to renewables and contribute greatly to the countries’ Race to Zero.